For the eighth straight year, noted author Doctor John Geyman, emeritus professor of the University of Washington School of Medicine, is scheduled to make a major presentation to the National Conferences on Primary Health Care Access.

The Twentieth National Conference will be held April 6-8, 2009 at the Hyatt Regency Monterey. Doctor Geyman’s thoughtful critiques on the state of the American health care delivery system are closely associated with a series of books he has written over the past decade.

The subject matter he addresses in his books (and his presentations to the National Conferences) is closely aligned with perennial National Conference themes. The American system presupposes that communities provide a safety net for its indigent and uninsured, yet this proves to be an illusion in much of the United States. 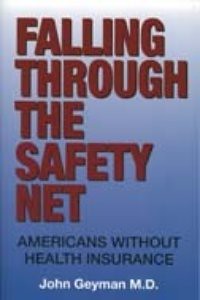 Even in communities with a tradition of having effective safety net services, resources are rarely keeping pace with demand. Furthermore, the goal of public policy arguably should not be who is in possession of an “insurance card” but the services that they can expect to access with such a card.

Over the next few months and years, there will be a high likelihood of a major evaluation of the state of health care in the United States and a discussion of how it might and should be reformed. Although there is much to praise, there are obvious, very serious deficiencies in the American model that undercut the good.

One appreciates the benefits of high technology medical skills, procedures and equipment, and agrees that research and investment in improved medical care benefits society as a whole.

Yet, one might argue, with arguments derived from information presented in Dr Geyman’s books, that some substantial percentage of health care activity is organized around the revenue streams available to high technology procedures and facilities.

But such revenue streams are not planned, nor are they market-based. When imbalances occur such as disinvestment in primary health care resources, in public health facilities and preventive medicine, we are all the worse off, even if some, for the present, feel they benefit from the existing system.

One of the lessons from the mortgage banking debacle, that led to so much economic chaos in 2008, is that a few people or institutions can “game” a system meant to produce a social good, in such a way as to bring harm to virtually everyone. It also demonstrated that even those of us who thought we were immune from being affected by the behaviors of persons in remote places found there to be unexpected and sometimes devastating consequences to ourselves.

Dr Geyman’s series of critiques provides a starting point for discussions on this website and at the National Conference as what types of behaviors may constitute “gaming” the present health care system.

The Twentieth National Conference themes will include a discussion of the public policy mistakes that took place in the 1960s, the last period of major health care reform initiatives, and which of these decisions should be revisited in any health care reform debate to take place this year.

In preparation for the National Conferences, there will be an forum on this website, discussing the issues that should be addressed during the debate on health care reform. (To access this forum, see: Forum on Health Care Reform: Doctor Allan Wilke’s Thoughts.)