[Editorial note: the leadoff panel at the Twenty-first National Conference on Primary Health Care Access will be moderated by and joined by Doctor Joshua Freeman on the Kansas University Medical Center in Kansas City. Recently, he posted this analysis of issues regarding the current health care reform legislation in Congress. Participants in the upcoming National Conference as well as other persons interested in the subject are invited to comment upon, endorse or disagree with Doctor Freeman’s essay. All comments are peer-reviewed, and should be sent to [email protected]]

The Business section of the New York Times on October 10, 2009, had a small article by Floyd Norris called “The Divided State of Health Care”. It looks at which states and, within those states, Congressional districts, have the highest number of uninsured. In a neat series of graphics, states are divided into “blue” (voted for Obama, have 2 Democratic senators), “red” (voted for McCain, have 2 Republican senators) and “purple” (some other combination). The red states had the highest percent of uninsured, led by my former state, Texas, with 26.5% of those under 65, including 17.8% of children under 18, uninsured. While not linear (the second highest percentage of uninsured is in Florida, a “purple” state, and third is New Mexico, a “blue” state), the association is strong. My home state of Kansas, which has only one (of 4) Democratic congressional districts, and only 2 of 105 counties that voted for the President, is the “best” of the red states. However, its 13.8% uninsured is worse than 14 of the 21 blue states and 7 of the 17 purple states.

From an ideological point of view, this is not surprising, given the vicious opposition of the Republican Party to any type of meaningful health reform. From a practical point of view, it might be surprising – why are the leaders of those states, where there is such great need, not interested in addressing that need? Or, at least, why do the people in the states that have such great need keep re-electing folks who oppose meeting their need? Part of the explanation may come from the second half of the analysis, which shows that it is theblue(Democratic) congressional districts within the red states that have the highest number of uninsured people. This is because these districts have a lot of poor and minority people and vote Democratic, but to the majority of people in the rest of those states, are the “other”: “Of the 10 Congressional districts with the least health insurance,” writes Norris, “seven are in Texas, two in California and one in Florida. Nine of those districts are largely black or Hispanic, and are represented by Democrats who faced little if any Republican opposition in the last election.” Whether this is explained mostly by classism, racism, or something else is an interesting question, but the result is that if you are a poor or minority person in a conservative state, you are in particularly bad straits.

Of course, it is not only the poor minority inner-city people who are left out. In Kansas, while Wyandotte County (Kansas City), one of the “blue” counties, is the poorest county, and also has a high percent of minorities, the next 6 poorest are in rural, white southeast Kansas. Why do these folks vote against their self-interest for Republicans? (Well, they don’t always.) Some of it is that there are other issues that attract their attention, and some of it is that they believe shamelessly propagated lies.

But some of it, as for so many Americans, is misunderstanding how health care costs work. Most of the money is not spent on most of the people. Journalists, living in their middle-class, young-to-middle aged worlds, are among the worst perpetrators of misunderstanding healthcare usage, writing about their rotator cuff surgery or their neighbor’s strep throat. 50% of people account for only 3% of health care costs; thus half of us are essentially “rounding error”. 5% of people account for 50% of costs. The other 45% are using about “their share”, or 47% of health dollars. If we look at this graphically, using (for fun) red, blue, and purple, we see: 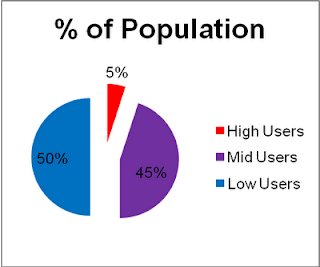 The 45% of people who are using about “their share” are those who have chronic health problems and have to go to doctors more frequently, and get more tests, but don’t have frequent hospitalizations. It also includes the folks who have, in a given year, surgery or physical therapy – like for those rotator cuffs – but usually are in the low use group. This portion of the population includes a disproportionate % of seniors, who have more chronic disease and use more health care services.

Seniors, because they are also more likely to have multiple chronic health problems that require multiple hospitalizations, and because they are more likely to have cancer, which costs a lot to treat, are also disproportionately represented in the high cost group. However, they are still the minority of that group. These high-cost users are the “outliers”, and also include other people with cancer, people with trauma, as from auto accidents, requiring multiple surgeries, and premature and sick babies requiring incredibly expensive care in neonatal intensive care units.

This is an extremely important concept, because it is the reason that insurance exchanges have gone bankrupt in every state that has tried it, and will not work at the federal level. While it is acknowledged that insurance companies “game the system” and “cherry pick” healthier people, the efforts in the current legislation to try to prevent that will not be sufficient, because, given the above data, they don’t have to enroll only people in the “low cost” group (although I’m sure they’d like that!), they just have to find subtle ways to get rid of one or two of those 5 high-cost people. For each one of those people they can avoid, they save the same amount as their cost for 10 “mid-user” people or 167 “low users”. None of the current legislation will be rigorous enough to force each insurance company to enroll 5% of the high users (in part because we don’t always know who they’re going to be – see below – which is also why they can’t have none of them). The insurance “exchanges” for uninsurables will then, soon, just as they have in each state that has tried it, become unsustainably expensive while the insurance companies continue to make big profits. See the amazing report in the Washington Times “Insurer ends health program rather than pay out big” to get a sense of what we can expect from insurance companies. (And note that this is from a very conservative newspaper!)

So if everyone looks at it from the point of view of their current self-interest, those in that “low use, low cost” group wouldn’t want to pay more for all those high-cost, high-use folks. This year, today, it wouldn’t be in our self-interest. Except…

…we don’t know when we, or our teenage children, will be in a car accident that rockets them from the low-cost to the high-cost group. And we don’t know when we’ll have a premature baby, or be diagnosed with cancer, or have us or our parents move from the mid-cost, have-chronic-conditions-and-see-the-doctor-but-rarely-be-hospitalized group to the high-cost be-hospitalized-a-lot-including-in-intensive-care group.

So we are all in it together. And the only system that prevents “gaming”, “cherry picking” and adverse selection is having one system. And that is what we need to adopt.

With profound thanks to Robert Ferrer, MD, MPH