As the process of implementing 2010’s federal health care legislation proceeds (see The Implementation Plan for the Patient Protection and Affordable Care and Education Reconciliation Act), debate on the wisdom of the legislation itself continues.

One of the most articulate of the dissenters, whose analytical work has been widely quoted in the press, on television, and on various Internet sites, is that of the Coastal Research Group’s Fellow, Doctor John Geyman. With permission of Dr Geyman, we will publish, each Tuesday in August, 2010 a chapter of a five part series on the problems Dr Geyman predicts will materialize as the Act is implemented.

Each chapter is distilled from Dr Geyman’s newest book, which will be available in both print and e-book formats at commoncouragepress.com. 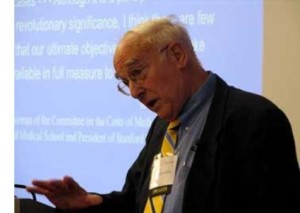 In our last post (Activities of the Fellows and Senior Fellows of the Coastal Research Group: Dr John Geyman Leads Forces of Dissent Against PPACA (Chapter 1: Cost Containment)), we looked at some of the uncontrolled drivers of rapidly rising health care costs despite all the assurances of our politicians supporting the new health care law, the Patient Protection and Affordability Care Act of 2010 (PPACA).

During the long run-up to this bill, President Obama told us that it would save the average American family $2,500 a year on insurance premiums (a claim that the Congressional Budget Office later dispelled as untrue (1), instead projecting a $2,300 increase in premium costs for the average family).

The inconvenient fact (2) is that premiums for families enrolled in employer-sponsored health plans from 2000 to 2008 increased by 97 percent, while those enrolled in individual plans increased by 90 percent; during this period, insurers’ payments to providers rose by 72 percent, medical inflation increased by 39 percent, wages grew by 29 percent and overall inflation went up by 21 percent.

According to a recent survey (3) by the Council of Insurance Agents and Brokers, more than one-half of smaller employers with 50 or fewer employees will face premium hikes for group policies in the 11 percent to 20 percent range for 2011.

So how in the world can we expect the new health care “reform” legislation to actually make health care and health insurance more affordable?

The new law promised not only cost savings but also provided for $476 billion (almost one-half of the total $1 trillion cost of the law in its first 10 years) in new federal subsidies to help lower- and middle-income Americans to pay for health insurance. We need to ask whether the promised cost savings are likely to materialize and whether the subsidies will help that much.

For openers, cost savings are an illusion. Supporters of PPACA assure us that several approaches will contain health care costs – such as an increase in wellness and prevention programs, wider application of health information technology, and experimentation with such initiatives as “accountable care organizations” and tweaks to the fee-for-service reimbursement system. Most are delayed for years into the future and none have yet been demonstrated to save money for patients and their families.

The cost of health care is certain to rise exponentially as far as we can see, since the market controls prices and the volume of services in a deregulated non-system. And insurance premiums are also certain to rise rapidly at rates way above the cost of living and median household income based on various industry-friendly loopholes in the law and gaming by the industry. These examples show how easy it will be for the industry to continue to exploit the public through both private and public programs:

• Under the new law, insurers can raise premiums based on age (by a 3:1 ratio), by geographic area, by the number of family members, and by tobacco use (by a 1.5 to 1 ratio).

• Many insurers are now aggressively marketing “wellness plans” in both private and public plans. One example is the Healthways SilverSneaker’s membership “fitness plan” (4) for seniors enrolled in Medicare Advantage plans. This is a clever strategy for insurers in two ways – they cherry-pick healthier seniors without infirmities that prevent their participation in such programs and then they charge 20 percent higher premiums (5) to those seniors not enrolled in fitness programs.

• Many healthier younger people will gamble with being uninsured until they get sick, in order to avoid paying fines for noncompliance with the individual mandate. This has already happened in Massachusetts over the four years since the “Massachusetts Miracle” was adopted in 2006. Since then, the number of short-term insurance buyers has increased by four-fold (6), getting insurance only after they have health care problems, then dumping coverage after they get care. This has increased the cost of insurance for other people and costs the state’s program an additional $300 million a year.

People with employer-sponsored group coverage will also take hits. As employers confront hikes in the costs of group coverage, they will pass along these costs (7) to their employees in the form of increased co-payments and deductibles, often with other restrictions in coverage. Middle-income families will be especially hard-hit if they have so-called Cadillac plans – those with annual premiums in excess of $8,500 for individuals and $23,000 for families. Employers will be faced with a tax on such plans beginning in 2013, when we can expect them to avoid the tax by limiting coverage and forcing more cost-sharing on their employees.

But won’t the nearly half a trillion dollars in federal subsidies over 10 years make health care affordable for lower- and middle-income Americans? Here too the story is not what we are being led to believe by pundits and supporting politicians. Subsidies will not start until 2014, and then are not available to people already covered by employer-sponsored insurance, those qualifying for Medicaid (incomes less than 133 percent of the federal poverty level, or FPL) and those earning more than 400 percent of FPL. Subsidies can only be obtained by those purchasing coverage on their own on an Exchange.

The Commonwealth Fund has established useful criteria to assess affordability of health care vs. other costs of living. When put up against other basic necessities of life, such as food, housing, and one car to get to work, health care costs above 10 percent of family income become a hardship level (8), as are medical expenses above 5 percent of family income for lower-income adults below 200 percent of the federal poverty level and those with health plan deductibles above 5 percent of income.

The Kaiser Family Foundation has developed a useful Health Reform Subsidy Calculator, by which people can readily determine their own health care costs. As an example, a family of four in with an income of $60,000 in 2014 can expect to be responsible for an insurance premium of $16,858 as well as $6,250 in out-of-pocket costs, which together would account for 18.6 percent of their household income. And those costs may well be higher due to restricted coverage of their own plan and changes in cost-sharing requirements. By comparison, seniors were paying an average of 15 percent of their annual income on premiums and out-of-pocket health care costs in 1965 when Medicare was enacted. (Blumenthal, D., et al. “Renewing the Promise: Medicare & its Reform.” New York, Oxford University Press, 1988.)

So far we have found little evidence that health care “reform” circa 2010 will contain health care costs or make health care more affordable. In our next post we will consider how much we can believe about claims of improved access to care.

(8) (Schoen, C, Doty, M, Collins, SR, Holmgren, AL. Commonwealth Fund. Insured but not protected: How many adults are underinsured, the experiences of adults with inadequate coverage mirror those of their uninsured peers, especially among the chronically ill. Health Affairs Web Exclusive, June 14, 2005)