As the process of implementing 2010’s federal health care legislation proceeds (see The Implementation Plan for the Patient Protection and Affordable Care and Education Reconciliation Act), debate on the wisdom of the legislation itself continues.

One of the most articulate of the dissenters, whose analytical work has been widely quoted in the press, on television, and on various Internet sites, is that of the Coastal Research Group’s Fellow, Doctor John Geyman. With permission of Dr Geyman, we will publish, each Tuesday in August, 2010 a chapter of a five part series on the problems Dr Geyman predicts will materialize as the Act is implemented.

Each chapter is distilled from Dr Geyman’s newest book, which will be available in both print and e-book formats at commoncouragepress.com.

[Below: the five parts of the series of essays by Dr John Geyman are excerpted from his latest book, published by the Common Courage Press.] 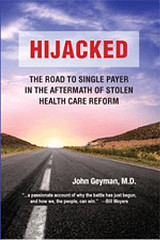 Our last four posts have examined the PPACA from the perspectives of the four main goals of health care reform — cost containment, affordability, improved access and quality of care. Here we draw these goals together in asking whether this legislation delivers enough to be worth the $1 trillion investment over the next 10 years and whether it will really work.

On the positive side of the ledger, the PPACA brings some welcome changes:

• Will extend health insurance to 32 million more people by 2019.

• Provides new funding for community health centers that could enable them to double their current capacity.

• Eliminates cost-sharing for many preventive services.

• Phases out the “doughnut hole” coverage gap for the Medicare prescription drug benefit.

• Will establish a nonprofit Patient-Centered Outcomes Research Institute to assess the relative outcomes, effectiveness and appropriateness of different treatments.

• Initiates some limited reforms of the insurance industry, such as prohibiting exclusions based on pre-existing conditions and banning of annual and lifetime limits.

• Contains some provisions to improve reimbursement for primary care physicians and expand the primary care workforce.

On the negative side of the ledger, however, these are some of the reasons that the PPACA will fall so far short of needed health care reform that it is not much better than nothing:

• Surging health care costs will not be contained as cost-sharing increases for patients and their families.

• Uncontrolled costs of health care and insurance will make them unaffordable for a large and growing part of the population.

• At least 23 million Americans will still be uninsured in 2019, with tens of millions more underinsured.

• Quality of care for the U. S. population is not likely to improve.

• Insurance “reforms” are so incomplete that the industry can easily continue to game the system.

• New layers of waste and bureaucracy, without added value, will further fragment the system.

• With its lack of price controls, the PPACA will prove to be a bonanza for corporate stakeholders in the medical-industrial complex.

• Perverse incentives within a minimally-regulated market-based system will still lead to overtreatment with inappropriate and unnecessary care even as millions of Americans forego necessary care because of cost.

• The “reformed” system is not sustainable and will require more fundamental reform sooner than later to rein in the excesses of the market.

How did this latest reform effort get so far off track? Here are three of the major reasons:

• The issues and policy options were framed as the political process was hijacked by the very interests that are largely responsible for today’s cost, access and quality problems in health care. As examples, the drug industry lobbied successfully to avoid any price controls of drugs, as the VA does so well; the insurance industry avoided real rate controls over their premiums and ended up with other loopholes to game the new system; and all of the corporate stakeholders will gain subsidized new markets without significant regulation of the market.

• The quest for bipartisanship was futile as reform got run over in the middle of the road. The big questions cannot be answered in the political center, such as whether health care should be a right or a privilege, or whether health care resources should be allocated based on ability to pay or medical need.

• Market failure was not recognized as the wellspring of our system problems. When it was agreed to “build on the strengths of the present system” instead of more fundamental reform, corporate stakeholders and their lobbyists found willing legislators to craft centrist “remedies” which could be sold to the public as  reform. But the various incremental tweaks of our existing system, such as employer and individual mandates, have failed over the last 20 or 30 years to remedy cost, access and quality problems.  In the absence of real health care reform, we can now expect these kinds of unfavorable outcomes in coming years:

• Soaring costs without effective price controls throughout the system.

• Persistent financial and other access barriers for many millions of Americans.

• Growing backlash by physicians and consumers.

• Gaming of private plans and adverse selection in public plans.

• Increased cost-sharing for employees as employers cut back benefits.

• Added bureaucracy and waste in an even more fragmented and dysfunctional system.

We have yet to learn that an unfettered health care marketplace can only perpetuate our problems, not fix them. Most industrialized nations have learned this many years ago, and are able to achieve better quality of care with improved outcomes for their populations even as they spend much less on health care than we do. We have to conclude that a larger role of government will be required to assure real and sustainable health care reform.

There is a fix in plain sight for our problems — single-payer financing coupled with a private delivery system. The private insurance industry has outlived its usefulness, and is only being kept alive by government subsidies, whether by overpayments of private Medicare plans or this latest provision in the PPACA to pay out nearly half of a trillion dollars in subsidized premiums for their inadequate coverage.

When will we have the political will to face up to our real problems in health care and show that the democratic process can still work?