We gratefully acknowledge the sponsorship of the Oregon Health Sciences University Department of Family Medicine (John Saultz, Chair) for funding the transcription and editing of this section of the Proceedings of the Twenty-Second National Conference:

Dr Clasen: Our next presenter is Tim Henderson, who will talk about the funding primary care medical education through the GME dollars of the Medicaid share. Tim, it’s nice to see  you here again.

For several years I’ve been doing a study for the Association of American Medical Colleges, that looks at how state Medicaid programs fund graduate medical education. I’m going to briefly talk about the latest report that was done in the last year to what the issues are and how states do this.

After the discussion of the facts, I will get into what I would call an opinion piece about some ways that I think states can enhance their ability to attract more funding for GME under Medicaid.

Finally, I’ll discuss what states specifically can do to retain and encourage physicians to practice primary care, particularly in those states where there are extreme shortages of primary care physicians.

So far in this conference, we have established the general context about Medicaid’s current condition, the legislative changes affecting it, and the challenge to it from the recession, and from the impact of people’s job losses.

Medicaid as a program has not only been under siege from a demand perspective, but it continues to be under siege, as it has for many years, from those looking to contain costs. This is not unique to the current situation. If you’ve followed the course of Medicaid funding for years, you know Medicaid funding follows a “wax and wane” cycle.

The work I’ve done shows that despite the pressures on Medicaid, GME funding under Medicaid in most states – maybe because it operates under the radar screen – has persisted and increased. As of 2009, it was up to about $3.8 billion. When you factor in that states also contributed about five billion dollars for undergraduate education, it’s possible to argue that in total state funding for education, including GME funding under Medicaid, is comparable to Medicare GME funding. 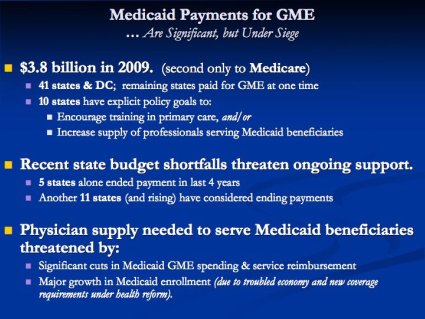 Even though most states pay for it, unlike GME funding from Medicare, Medicaid support for GME is strictly voluntary. A state does not have to include it in its Medicaid program. It’s an optional service, available to states if they wish contribute the required matching funds to secure it.

Every state, at one time or another, has paid for Medicaid GME. In 2009, as shown above, most states continued to pay for it. But all the states that did not pay at that point had paid for GME at a previous point in time.

There are points about primary care medical education that I want to make, that are consistent with all the surveys that I’ve done over the years.

A number of states have very specific rationales as to why they fund GME through this source. Ten states have explicit goals within their Medicaid program that mirror each state’s larger overall goals related to the health care workforce. Some of these goals address what we’ve known historically in many states to be a primary care shortage.

There is finally a realization – and I say finally because of the number of years it took many states to realize that their long term problems attracting primary care professionals that serve their Medicaid beneficiaries could be addressed through their Medicaid programs. As a result, the states have begun to realize that the payments they make for GME are important for giving their state’s medical residents and students exposure to serving Medicaid beneficiaries in their training. Through this support, they are hoping to encourage them (or at least not discourage them) to want to see these patients upon graduation.

At the time of the survey (2005-06) there was a relatively healthy state of affairs for funding. A lot has changed since then. It’s clear that, in terms of state support, that we are starting to see some cracks in the ice. In the four years since I did the last survey, five states have stopped making payments. What is also of concern is that there were at least another 11 states at the time of last year’s survey,reporting that they were concerned that they might not continue to be making payments. This is indicative, I think, of the recessionary economy and the resulting pressure that states are facing.

To be honest, I think there is a downside to this report, which has been out for a while. This particular use of Medicaid funds has become more transparent to state legislators, and to other people concerned with the Medicaid program. Perhaps legislators becoming aware of a funding program they didn’t know existed may make this program’s continued funding more open to scrutiny.

Thus a program that is designed to increase physician supply, particularly primary care physicians, is likely to be threatened by these ongoing cuts and by the impact  on the existing programs from having so many new patients that states can’t handle the demand.

How do we deal with this problem in the near term? If you’re not a Medicaid aficionado you may not know this, but one of the very common methods the state Medicaid programs use to maximize their funding is a mechanism called the intergovernmental transfer mechanism or IGT.

Many state Medicaid programs use IGT beyond their regular state federal matching share arrangements to draw down additional federal dollars, using state funds, typically to expand services for those people that are newly enrolled in Medicaid. 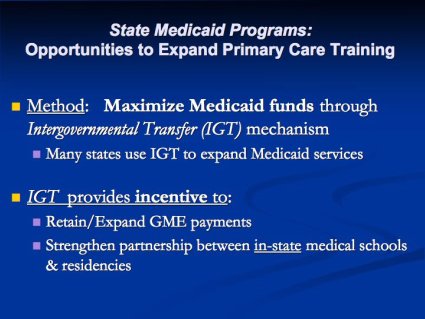 I have to admit that I have often recommended this strategy. Yet, I’ve found in my research that there are still a number of states whose primary care medical education community or planners outside of Medicaid didn’t know that this same mechanism can be used to fund or to expand funding for GME, just like any other service that Medicaid provides.

What source of funds would a state use in the way of matching money? Let’s say that they use the appropriations that a state provides for medical education at its own public university. In fact, that is an excellent example of what can be used as matching funds. A number of states are doing this now and each state has used different mechanisms to make this work. (I’ll be happy to talk with you further about this if you’re interested.)

Not only can these Medicaid payments expand funding for GME, they also can help ensure that if the appropriations that the Medicaid program gets directly from the legislature were reduced, GME would not be as threatened.

If you follow the politics of Medicaid, you know that the IGT mechanism  in and of itself is threatened as a means for states to be able to draw down federal funds. Many people have thought IGT to be an abuse of the Medicaid system. But currently, it’s a mechanism that does exist and it’s fair for states to use it.

The potential for publicly-funded medical schools

I have my own little soap box about incentives that could be built into this program. Earlier Dr Joshua Freeman mentioned that if you looked at those lists of medical schools across country that fair better in training more students wanting to go into family medicine, most of them are public schools (see Proceedings of the 22nd National Conference: The 21st G. Gayle Stephens Lecture: Dr Joshua Freeman). Perhaps there is no surprise there.

No one is arguing that we should try to limit the options for these graduating physicians to match with residency programs and medical specialties of their choice. But with the proper incentives, I believe states could do a lot more than they are doing to get many of the primary care graduates interested in family medicine to stay in state, particularly in the areas with the greatest primary care needs.

Right now the system is not designed to encourage students to match their own residency programs in their own states. But I would argue that this program can do that. In my opinion, there are different ways to use this mechanism to encourage this.

Dr Clasen: We have a question of you from Doctor David Sundwall, from the State of Utah.

David N. Sundwall, MD, MPH, University of Utah:  Tim, as always you’re the resident expert on Medicaid and GME. We appreciate your comments very much.

But I was surprised to hear you, in this day and age, in this climate of great austerity and scrutiny of Medicaid, say, “Hey it’s still legal. Go for it. Use your institutional transfers and be clever with how you use Medicaid for GME”.

The State of Utah just had to pay back $32 million in a move that was considered too clever by half in how they were using their Medicaid money. Others have had even higher paybacks for what the federal authorities perceived as misuse of Medicaid or Medicare for GME.

Do you really think that in this era of scrutiny that a state can do this and then, if caught, to ask for forgiveness later? Do you think this is the right time to be creative in how we use Medicaid funding for GME?

Mr Henderson: My simple proposition, David, is that the current system allows a perfectly legal and justified procedure to fund primary care GME through Medicaid. If a state were to do something that CMS does not permit, then, of course, there should be a legitimate concern as to the appropriateness of the transfer. I don’t argue that.

But I’m a “states rights” person, as you know. So I argue that, under the current system, a state, regardless of whether it’s for GME or for service expansion or for any other reason, that wants to use that mechanism is entitled to use it.

It has historically been used for these purposes and therefore I ask why not have the primary care training programs take advantage of that opportunity to fund GME. There is no intent to abuse this mechanism, but simply to take advantage of the current opportunity. That was all I was suggesting. I think a lot of educational programs aren’t aware that this mechanism exists.