We gratefully acknowledge the sponsorship of the Penn State University Hershey Medical Center Department of Family Medicine (James Herman, Chair) for funding the transcription and editing of this section of the Proceedings of the Twenty-Second National Conference:

Robert Ross, MD, Klamath Falls, Oregon: Good morning, and welcome to the second day of the 22nd National Conference on Primary Health Care Access, my very favorite meeting of the year. Every year I look forward to this. I’ve not been disappointed, and have enjoyed this year’s initial peeling back of the onion of the Patient Protection and Accountable Care Act by Doctors John Geyman, Richard Clover and David Sundwall, as to how well it works.

We will get started with the first plenary panel of the second day. Dr Kahn will begin.

Norman Kahn, MD, Council of Medical Specialty Societies, Chicago: Good morning, everyone. It’s a pleasure to be back here after a few years’ absence. Dr Josh Freeman yesterday alluded to the fact that I now work for the Council of Medical Specialty Societies. Part of what you get when you take that job is a full body armor, so that you can shoot anything you want at me and it will just bounce back at you.

We’re going to talk a little bit this morning – continuing the theme of how it will work.

In many ways PPACA is a typical act of Congress, cobbled together with a number of different interests that my appear fragmented at some point. The biggest impact is the fact that it increases health insurance coverage for nearly 32 million more people.

The first is that, as of this year, there is now a 10% increase in Medicare Part B payments for the typical valuation of management codes of primary care clinicians. We were talking in our morning breakout group about how this is going to cover such things as preventive services that we would like to have in a health care system.

Parity between Medicaid and Medicare Reimbursements

By 2013-14 Medicaid is intended to be on a parity with Medicare for evaluation and management codes. That would be big!

California 20 years ago enhanced the reimbursement rates for maternity care in the MediCal program (California’s version of Medicaid) to rates close to those paid by private insurance. The rate for delivering a baby went from the then current rate of $200 a delivery to $1200, a sixfold increase!  Immediately, the MediCal maternity population had no trouble in obtaining access to care.

As an anecdote, I first practiced in the rural town of Hughson, California, 20 miles outside of Modesto. When my first prenatal patient walked in the examination room, she was seven months pregnant. Before I entered the room, she broke into tears. She explained to me that she had an obstetrician, but, when the patient qualified for MediCal, the obstetrician told her that she, the obstetrician, could not continue to see her. Since I accepted MediCal, that’s why the patient had first come to me so late in her pregnancy. But, as soon as MediCal raised its rates for deliveries sixfold, the obstetrician agreed to see her again. Therefore, this feature of PPACA should have good results!

There’s another part that might help primary care physicians through loan modifications for medical school graduates pursuing primary care practices. Those provisions specify how long you have to practice, but reduce the penalties for noncompliance. It also prohibits consideration of parental income in determining applicant’s needs, and makes it generally easier to get one’s student loans paid off. There’s more money for the National Health Service Corps scholarships as well. These are some of the more attractive pieces cobbled into the statute.

Impact on Specialty of Pediatrics

There are specific provisions for pediatricians. The specialty of Pediatrics has been very successful in creating a national movement towards pediatric sub-specialization.  The new provisions will be a very interesting challenge for Pediatrics, since the legislation so clearly identifies it with primary care. How the legislation will impact Pediatrics in the future remains to be seen.

The legislation has some unusually proactive federal policy towards Medicare reimbursement of graduate medical education (GME). For years the primary care physician societies have been clamoring for a proactive GME policy, but they generally just continue to give money to hospitals, without favoring primary care.

But PPACA redistributes “unused” (eligible for Medicare reimbursement but unfilled) residency position. Under the new law, if a hospital requests new positions from the unused positions under the “cap” (the total number of GME positions that Medicare has agreed previously to reimburse), 75% of the positions must go to primary care specialties or to general surgery. So there is some proactive policy in the legislation.

As usual, federal legislation creates a new commission to advise on health policy, which no one listens to afterwards. This creates the National Health Workforce Commission, to which some interesting people have been appointed. Watch for Tom Ricketts, who is a very sharp guy who works in North Carolina. [Note: Dr Kahn refers to Thomas Ricketts, Ph.D. of the University of North Carolin School of Global Public Health in Chapel Hill.]

There is primary care trining support and a primary care extension program which isn’t funded; and, of course, the funds are increased in competitive grant programs. (As someone who always applied for and depended on competitive grant programs in family medicine education, I would be the first to tell you that it’s not a sustainable model for training.)

One should consider the changes in PPACA in a larger context, which would include the recommendations of previous national entities. Part of that context would be the Medicare Payment Advisory Commission, known as MedPAC. The 2008 recommendations in the slide below obviously influenced PPACA’s sections on Accountable Care Organizations and on Comparative Effectiveness Research. MedPAC is a federal agency that somebody actually appears to listen to. 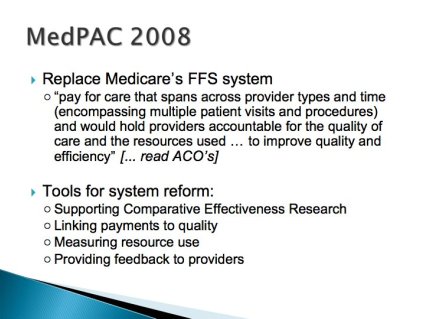 Then there was the American Recovery and Reinvestment Act of 2009 [Note: better known as the “Stimulus” or “The Recovery Act”.] It created the Federal Coordinating Council for Comparative Effectiveness Research, which later evolved into the Patient Centered Outcomes Research Institute [PCORI].

The money for comparative effectivness research has been authorized, but no money has been appropriated to it. There is a large national effort, of which my Council of Medical Specialty Societies is part, to try to convince Congress to appropriate money for that purpose.

Then, of course, there is COGME, the Council on Graduate Medical Education. Here are key recommendations from its 20th report in 2010. (It sounds like Joshua Freeman wrote them!) 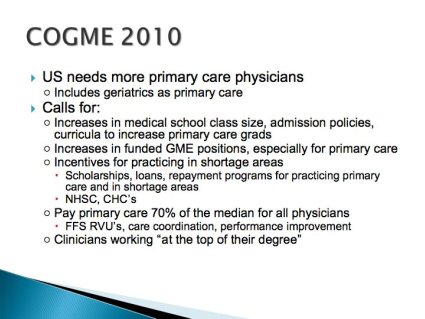 The problem is that Congress doesn’t listen to COGME. Whether any of these ideas will materialize remains to be seen. It is interesting to work for an organization like mine, which is small and fairly focused. We don’t take a lot of political positions, but we did take a position in support of COGME’s 20th report.

Secretary Kathleen Sebelius, Secretary of the Department of Health and Human Services, has requested two studies of the Institute of Medicine: 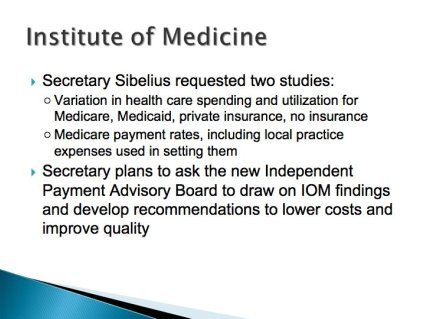 She is seeking a study on variations on healthcare spending and utilization, not just for Medicare and Medicaid recipients, but also for the private insured and the uninsured. She is also seeking information on Medicare payment rates, including the practice expenses used in setting them. She also intends to ask for a new independent payment advisory board. It will draw on the IOM findings and develop recommendations to lower cost and assure quality.

I will finish with a few caveats. Congress has a history of ignoring COGME, so perhaps it doesn’t matter what COGME recommends. Comparative effectiveness research is authorized, but no appropriations have been made to it. The mood in Cogress right now is to not appropriate anything to implement the PPACA. IOM recommendations are not binding and the committees that form their recommendations are disbanded as soon as the recommendations are made.

Accountable care organizations are in the planning phase now. They are not demonstration project and become effective at the beginning of 2012. They do prioritize the role of primary care, but the whole implementation of PPACA is at risk. 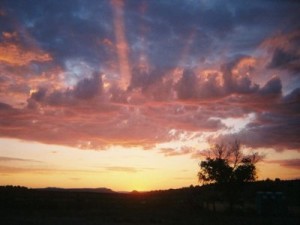 Yet, it is a new dawn. Pehaps we will see some improvements, but that remains to be seen. Thank you.