We gratefully acknowledge the sponsorship of the Wright State University Boonshoft School of Medicine (Dayton, Ohio) for funding the transcription and editing of this section of the Proceedings of the Twenty-Fifth National Conference:

First of all, let me thank you for the invitation to be here again. I love this meeting for lots of reasons, and it’s fitting that Norm Kahn and I should do this presentation.

Norm didn’t mention it, but he was the AAFP staff member of the American Academy of Family Physicians [AAFP] – one of the sheriffs, so to speak – of the initial “Future of Family Medicine Project” a decade ago.

I have been blessed with a similar role for the Future of Family Medicine 2.0 project (FFM 2.0) project this next year. 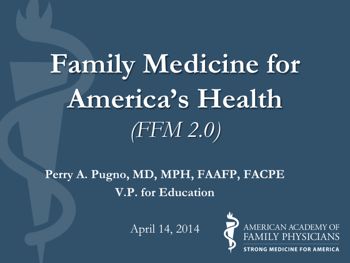 So I have a perspective not unlike the one Norm had during the first Future of Family Medicine project.

But I have a perspective that’s a little different than some of the things that Norm said to you this morning. I want to go ahead and share that.

First of all, like Norm, I will do my good role modeling of disclosure. I work for the American Academy of Family Physicians [AAFP] For family physicians in the audience, these are your dues at work. I work for you.

You all know that I’m fairly up front with my prejudices and biases. But, technically, I have no conflicts of interest and, so, you can trust me. 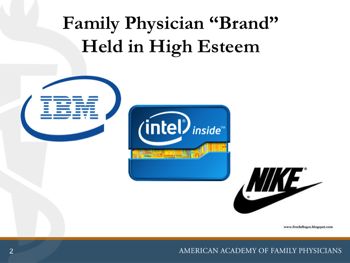 I will begin by describing the FFM 2.0 project. Like the first one, we did extensive research on public opinion.

The research used focus groups, surveys, and a number of different tools collecting information about family medicine from the public, from business leaders, from policy makers, from physicians and other healthcare providers across the country to get a sense of what is today’s perspective of the brand, so to speak, of the family physician.

This was conducted by APCO Worldwide Inc., which is an international branding and marketing firm.

They came back to us with what many of us believed was a somewhat unexpected finding. They told us that we are on a par with these industries listed, as far as public perceptions of family physicians. Family physicians in this nation are held in high esteem.

The window of opportunity has opened, the debate is in play. Family medicine has some visibility in this nation right now, and the visibility that it has is a positive one. The branding people told us that companies spend their entire business life trying to achieve what family medicine has as we start.

Norm asked a humber of questions from his view point of exposure to the other medical specialties and the environment in which he works and what he hears.

Our consultants asked similar questions. They went to the business and policy community, to the patient community and to the physician and other healthcare provider community, asked the question about whether they believe family physicians have an impact on the healthcare system. 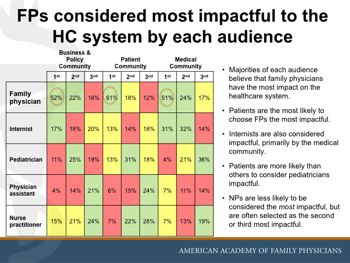 The results of that research are that family physicians are considered to be the most impactful group to the health system by each of those audiences.

Now, it’s not all of them. It’s around 2/3rds feel that family docs are the most impactful.

But we have come into an opportunity of visibility and impact. So the public likes us. Policy makers like us. Payers like us. The challenge to us right now is that we need to step up to the plate and deliver on “the promise.”

The Family Physician of the Future

As an AAFP staff member and an old time family medicine educator I worried a bit about what would come up, because we heard a lot of different voices in this project. 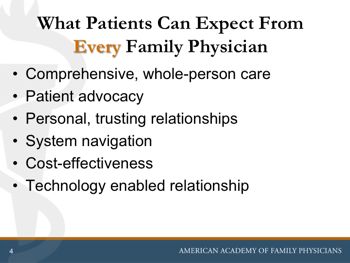 The final decision, as of last Tuesday (April 8, 2014, the final meeting of the core group and the steering committee for the project) is that this is what patients can expect from a family physician.

We are not going to invent a new, sharp, pokey thing that will pay us a lot. But we will leverage technology to enhance the relationship; which is what our patients value.

There are two components to the project. One is the branding component that I mentioned, and I’ll tell you a little bit more about that in a minute.

The Planks of the Strategic Plan

First, we had to clarify what it is we want to deliver. What are the planks of our strategic plan? 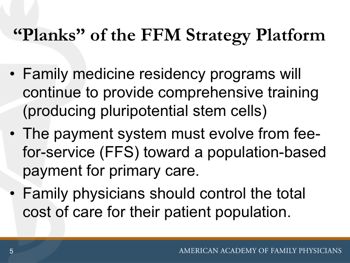 I’m summarizing them here in general terms for you. The specifics are going to evolve over the next five to six years, but this is the general direction that the future of family medicine project is going to advance.

We will go to communities of need, and our graduates will evolve to become the kind of physician and provide the kind of services that those communities need. We have been extraordinarily successful doing that for the past four decades. 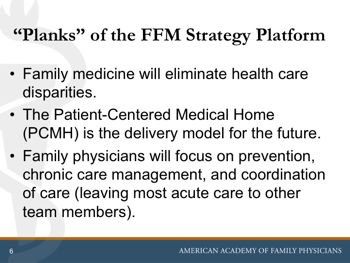 A key component of this strategy is that we are going to help the payment system evolve forward.

“Fee for service” is not a long-term functional solution, and we need to help the system evolve from “fee for service” toward a population based comprehensive payment system.

One of the ways to do that is for family physicians to truly control the total cost for care for their patients. That’s where we can be most effective.

Health disparities in this country persist on a population basis, on a geographic basis and on the basis of sub-communities. We will continue to work hard to eliminate those disparities.

We got the name and idea of the patient-centered medical home [PCMH} from the pediatricians.But we have significantly evolved the PCMH model of care, and made it our own. It will be the delivery model for the future, and we will be training to that model.

Family physicians – the public spoke loud and clear about this – need to focus on the preventive care component and chronic care in the future.

Does that mean that we are giving up on acute care? No! But if you get a “boo boo”, mayve the CVS Minute Clinic can deal with it, and we’re just not going to fight that anymore. That’s going to continue to evolve, and that’s a reality.

Our responsibility is to try and develop relationships with those entities so that the information from those encounters come to us and give us more context in dealing with our patients. But we will continue to keep an eye on them to make sure that they [CVS] don’t try to deliver more than they say they can.

So, acute care will receive less emphasis in our training and in our practices. Prevention and chronic care management will be the emphasis going forward.. 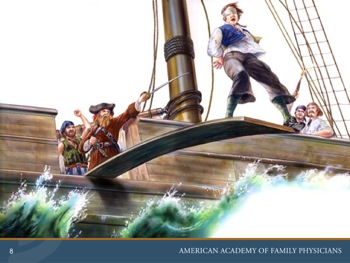 We’re going to stop fighting “scope of practice” battles with others.There’s plenty of business for everybody.

In fact, there’s too much business for everybody. We’re going to stop burning resources fighting those battles.

As I said earlier, we will leverage technology to the benefit of our patients.

These are the going forward planks. We are cautiously optimistic that the plank will not lead us to anything we should worry about. 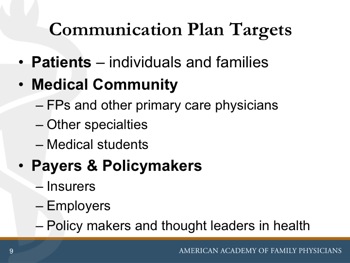 Now we need to communicate this. The key targets are our patients, the medical community (many physicians have great difficulty understanding what we do and who we are) and both payers and policy makers.

One of the questions that Norm asked is, “How do the regulators and policy makers and folks like that, feel about us?”

Well, those who have figured out that we’re the ones who can deliver on the Triple Aim, provide quality care most cost effectively and make a difference on a population level, they love us. And those who are figuring us out, those numbers are growing. 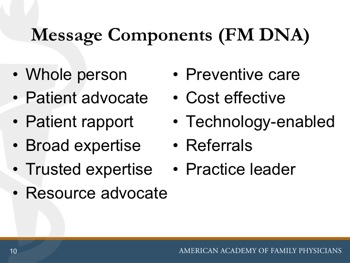 We really do need to impact the policy makers as they start making differences in the laws and payment systems that affect our daily lives.

We also went through and tried to identify, what is the DNA of family medicine that we need to communicate forward? What are our core elements?

The communication plan, as you might expect, for the discipline of family medicine, is going to be a significant marketing effort.

When you start dealing with the national media, both earned and paid, you start getting into eight figure numbers. But this is being considered an investment, going forward for the discipline, and it would appear that we’re all in line to do this.

So we’re on our way to the future. When I was putting this slide together a trivia question came to mind. 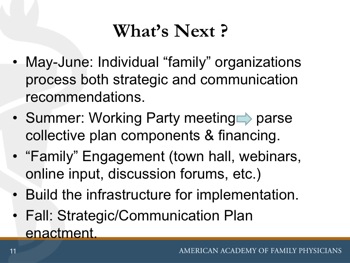 Have you ever seen the bio-physiological display in Sick Bay from the original Star Trek series?

In The Star Trek Next Generation series, there’s an additional parameter besides heart rate and stuff like that, and that parameter is (if you could read the fine print on your big screen TV), on the left hand side at the bottom, it says, “Remaining Health Insurance”.

Well maybe we can eliminate that component and move even beyond The Next Generation.

A lot of people have asked me, “So now, what’s next?” Well, all of this information that I showed you was the result of the last meeting of the steering committee for the project.

They have all gone back to the boards of the family organizations to say, “Here’s the plan; are you in or out? And how much are you willing to pony up to contribute to the carrying out of this plan?”

That’s the question before the boards of the family medicine organizations right now. And they have until May 15th to make that decision, because we’re moving forward.

Over the course of this summer, we’re going to be continuing to disseminate the information about what’s been decided and to collect more information from the rank and file – webinars, town hall meetings, that sort of thing – to get more input and perspectives from the field as to how we’re going to carry this out.

The rollout will be at the AAFP Assembly in October. By the way, the name has changed. It is no longer the “Scientific” Assembly, it’s just the Assembly. (I guess we’re not scientific anymore.)

As we’re planning that roll out this August, there’s a meeting called the working party, which is when all the family members come together.

It’s misnamed because very little work gets done and it certainly isn’t a party. But it’s still called the working party. And those who are going will parse out the components of the strategic plan amongst the different organizations. Each organization will take the lead in one or more of the components just like they did with the last project.

As I said the roll out for the project is in October. And in the fall, the five to six year communication plan will begin. So, we are off to the future and it is not so far from reality anymore.

I’ll stop there, and I think we’re up for some questions.

This session is followed by: Proceedings of the 25th National Conference; April 14, 2014 (First Plenary Session, Q & A)