We gratefully acknowledge the sponsorship of the Charles Q. North, MD of the University of New Mexico Department of Family and Community Medicine for his support of the transcription and editing of this section of the Proceedings of the Twenty-Sixth National Conference:

Good morning! My role today is to be the moderator, which is largely a time keeper. For those of you who have not been here before, welcome! I think you’ll really enjoy this conference and these conversations over the next three days. They’re thought provoking and challenging, with lots of new and controversial ideas.

There’ll be a question and answer session following each of the presentations. After each presentation there will be an assigned lead questioner. That individual comes up to the microphone, and asks a question related to the session. Others are welcome to line up behind the lead questioner. When you do, please state your name and where you’re from for the record for the transcription.

Without any further ado, I’m going to ask the three individuals who constitute the National Conference’s first plenary panel, entitled “Issues in the Training of Primary Care Physicians”, with Tim Henderson from George Mason University, Stanley Kozakowski from the American Academy of Family Physicians and Thomas Hanson from Advocate Healthcare in Chicago.

Good morning! It’s good to be back. Let me ask you first of all, you can see I’m going to be talking a little bit about the Institute of Medicine (IOM) Report that came out in July, 2014.

I’m not going to be addressing issues about the clinical aspects of the report or the number of physicians that should be trained. I’m going to be looking at the report’s implications for public policy and the public good.

This was a very controversial report and I suspect we might have a number of different opinions in this room about the recommendations that IOM made on the report. 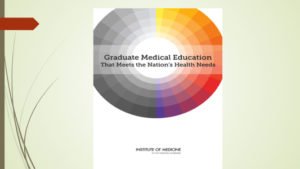 I want to look first at the goals that IOM set out when they developed when they produced this report. There were six major goals that were issued here. The reason for the different colors there is this is what I’m going to be  paying particular attention to are the goals three, four, and five of the report. 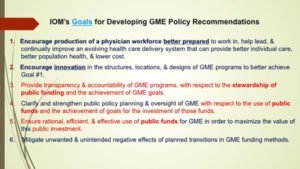 I will not be talking about ways to address curriculum innovation, or practice incentives and so forth that a lot of the graduate medical education (GME) policy parts were related to, but instead to talk more about the controversy associated with how accountable GME is, particularly as a public good.

As IOM points out, it costs about $15 billion to support graduate medical education. GME is largely a government subsidy; largely Medicare, Medicaid and a few other sources of payment. I’m going to be talking about what the report addressed in regards to how effective it is as a public subsidy and to what extent GME is being accountable to the public 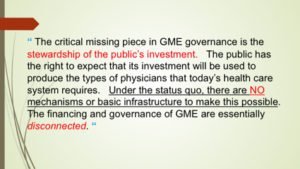 I love this quote from the report. “The critical missing piece in GME governance is the stewardship of the public’s investment. The public has the right to expect that its investment will be used to produce the types of physicians that today’s health care system requires. Under the status quo there are no mechanisms, or basic infrastructure to make this possible.” 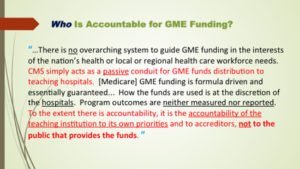 In essence, they’re saying the financing and governance of GME are essentially disconnected. I’m going to provoke you to respond as to whether you agree or not agree with that statement. But I think this is one of the fairly bold statements that the report makes – that clearly there’s a missing link between what the programs do and what the taxpayers want from those dollars spent.

The IOM report goes on to say that clearly the stewardship of public funding is lacking. They gave a number of examples to support this statement: (1) the GME system does not yield useful data on program outcomes and performance, (2) there is no mechanism for time payments to the workforce needs of the healthcare delivery system, (3) there is no requirement that after graduation from a Medicare or Medicaid supported residency program that physicians accept or provide services to Medicare or Medicaid patients. The  only mechanism for insuring accountability is the requirement that residency programs be accredited. 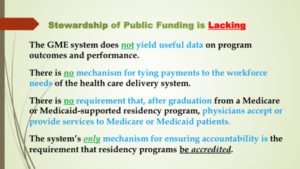 These are pretty bold, critical statements made by the report to support its contention that stewardship is lacking.

The IOM went on to ask, who really is accountable for GME funding? I think they were quite concerned, as suggested by the quote “there is no overarching system to guide GME funding in the interest in the Nation’s local or health or regional health workforce needs. CMS, the Centers for Medicare, Medicaid Services simply acts as a passive conduit for GME funds, distribution to teaching hospitals. Medicare GME funding is formula driven and essentially guaranteed. How the funds are used is at the discretion of the hospitals. Program outcomes are neither measured nor reported. And to the extent that there is accountability, it’s accountability of the teaching institution and to its own priorities. And to accreditors and not to the public that provides the funds.”

The crux of the concern that IOM is speaking to here; is its question as to where is the link, where is the accountability to this $15 billion that comes from taxpayers for the use of these funds?

The public, the report goes on to say, in order to actually promote accountability effectively, and good governance requires transparency.  (Many of you know I am a governmental public policy- oriented person professionally interested in this issue.) 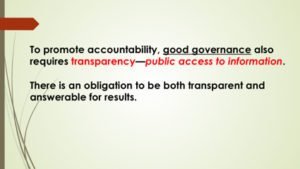 Here’s some examples of where they find a lot of transparency lacking, Do we have the outcomes and data associated with what those answers are. Do we even know much each teaching institution receives in GME funding each year? What proportion of these payments are used?

Those of you who work in training institutions inside the hospital, know we have a “black box” problem in terms of where the money goes. 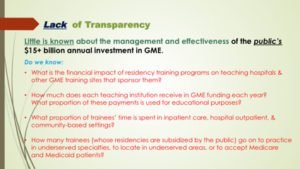 Little is known about the overall cost. Of course, we know that of residency training. CMS is in part the culprit, because they only require that hospitals report a minimal amount of information back to them in order for them to continue to receive Medicare funding in particular.

The key here is the third point, that GME program staff have little knowledge of, or control over, how GME funds flow within their own institutions. 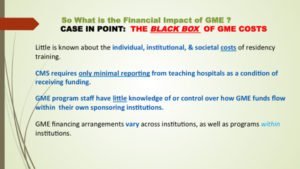 This is the black box phenomenon. We know that the monies flow into the coffers of the financial controller of the hospitals, but we clearly don’t have much information about where the money goes from there.

As I end here, these are some of the questions I’d like us to think about moving forward.  Who in the GME system has the most willpower to incentivize GME’s future? Who really does? Are they the advocates of reform, or are they advocates of the status quo.? If you’ve read the report and you’ve read the aftermath of the report, you know how certain major players among the system’s stakeholders came forward and immediately either promoted or denounced the recommendations. You can see where some people took sides. But how do you feel? Do you think the chances of this getting changed are going to lie in the status quo or in the reform movement? 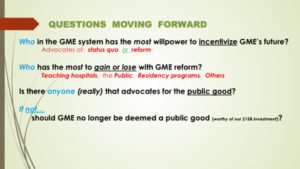 Who has the most to gain or lose from GME reform? As far as the teaching hospitals, or is it the general public, residency programs, others? Who is really going to gain and lose the most?

To center on this issue of public accountability I’d like you to think about whether there really are advocates for the public good out there as far as GME is concerned? If there are not, should GME no longer be deemed a public good, worthy of this $15 billion investment? Should we, or those of us involved with GME, assume that the public is going to continue to want to invest this money through Medicare and other sources?

So, that’s some food for thought. Thank you very much!