We gratefully acknowledge the sponsorship of the Charles Q. North, MD of the University of New Mexico Department of Family and Community Medicine for his support of the transcription and editing of this section of the Proceedings of the Twenty-Sixth National Conference

Bill Burnett asked me to touch on two topics during my ten minutes. One is the American Academy of Family Physicians (AAFP), response to the Institute of Medicine (IOM) report and then give you a brief update on the Family Medicine for American’s Health project. We’re going on a whirlwind tour here. 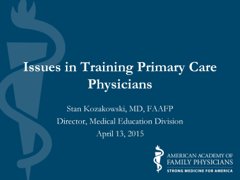 As a matter of disclosure, I’m speaking as an individual today, not as a member of the AAFP because some of the things I have to say may not totally align with the AAFP policies.

The IOM report [see “Time Will Tell”: the Proceedings of the 26th National Conference – “Issues in the Training of Primary Care Physicians (Part One, Henderson)”, Monday April 13, 2015] report came out in summer 2014. 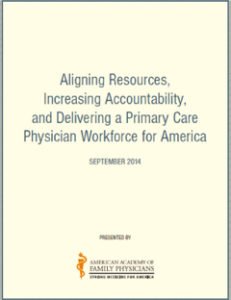 On September 15 of that year, the Academy presented a position paper on Capitol Hill. There were two campaign pieces that went with this. Essentially the Academy believes that the IOM got it mostly right.

We as the AAFP put forth five policy recommendations. The first recommendation has to do with limiting payment for GME to “first certificate” programs.

Over the last decade, there have been a significant number and percentage of additional GME slots funded. If one agrees that we, 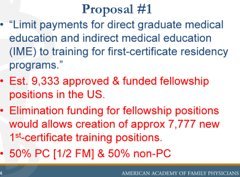 as a nation, have a need to increase our primary care base and to address other potential specialty shortages, how GME funds are used should be considered.

If the funds for the 7700 existing fellowship positions were shifted to new first certificate programs, that could potentially fund another 7700 new first certificate programs. The AAFP recommendation is that half of those positions go to primary care specialties, and half of those allocated to primary care go to family medicine. 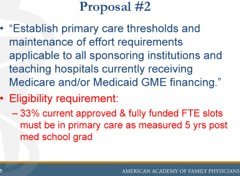 The AAFP’s second recommendation is that there should be thresholds for receiving these government funds, that relate to production of primary care physicians.

Our recommendation is that a third of the positions that an institution receives are funding primary care positions. We define the primary care specialties as family medicine, general internal medicine and general pediatrics.

This recommendation addresses what has been referred to as the “Deans Lie”. I think about this as a systems issue and not as an intentional lie, but we do have a system designed to produce the results that we have. We know that five years out from a physician’s graduation from residency is a better measure of whether that physician is practicing primary care.. 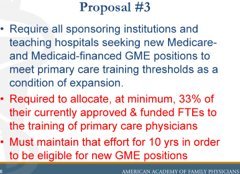 The third AAFP recommendation is that for an institution to seek additional slots, there should be a demonstration that those positions going into primary care.

The institution should demonstrate that it is maintaining its primary care effort over the long haul.

4. Provide for for Innovation in Funding Formulas 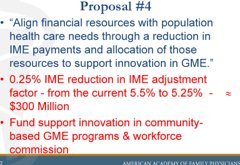 If there were an adjustment of the indirect medical education (IME) factor reducing it by a quarter percent, it would free up about $300 million that could be used to fund a workforce commission as well as innovation in community-based training. 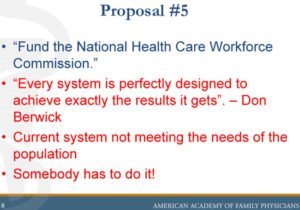 The fifth recommendation is to fund a national workforce commission. We know that politically that name may be problematic but the concept of an oversight body is important. Somebody has to do it. It’s not being done here in this country. That’s essentially the AAFP position on the IOM.

In 2014 at the annual AAFP assembly we launched the Family Medicine for America’s Health effort.

We launched this effort in September, 2014, to coincide with an AAFP Assembly was meeting in Washington, D.C., even though it was not fully fleshed out.

So here’s the report. I would recommend to you the article in Family Medicine, looking at the foundations. 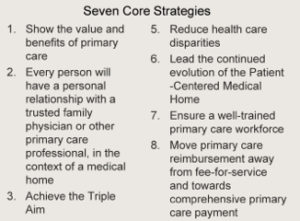 There are seven core strategies that are found in that report. Essentially,  they articulate our need to connect our nation’s people with a trusted source of care. We need to achieve the Triple Aim; we need to demonstrate value, et cetera.

In order to have a well trained workforce to do that we have to have systems in place to support that, financially and otherwise. 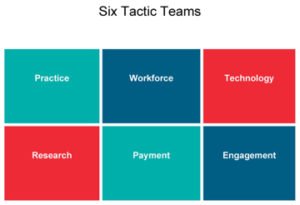 There are six tactic teams which began  in January. 2015. They are looking at ways to set direction.

Each of these six tactics is important, and each team has been asked to develop a set of initial tactics. Today we will focus momentarily on the workforce, which is where medical education lies. 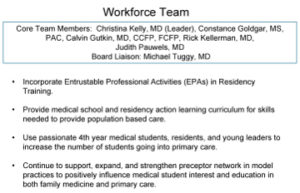 The workforce team here is looking at four initial tactics:

(2) providing the skills needed for population health, (because that’s something new and evolving)

(3) increasing the number of students going into primary care and, particularly, into family medicine; and,

(4) addressing the national problem of  inadequate numbers of preceptors.

Supporting this effort is a public relations campaign.

That campaign comprised of press events. Concurrently, a series of rallies are planned that convene people on a local level.

The goal is eventually to create tool kits that can be used in any community. 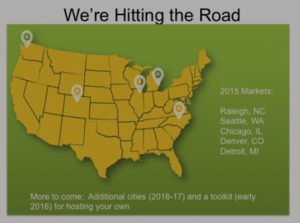 This is the strategy on which we have embarked. But the challenge we have before is to decide whether we asking the right questions?

Look at this list of initial activities around workforce and education. Are these the right ones that we should be focusing on right now? I’m not so sure. I hope we can talk about that as we get into our Q & A. 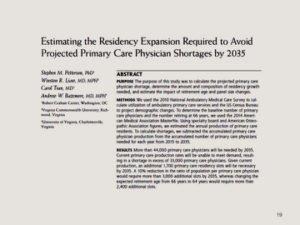 When considering workforce, do we know what we need and how we’re going to get there?

I would recommend to you Bazemore and Peterson’s article that was published in Family Medicine.

I draw your attention to what they see as a 33,000 primary care physician shortage by 2035. 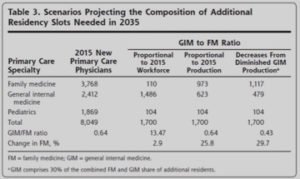 With our current level of production we would need an additional 1700 primary care residency slots in order to produce that workforce.

If there is a reduction in the number of patients cared for by a physician, that number changes and, according to the authors, could be 3,000.

If we play with the retirement age and so on, the numbers shift again. So predicting the workforce needed is certainly a major challenge.

For family medicine, depending on how you slice the numbers and what assumptions you make, it could be as many as 1700 additional slots are needed, given current trends in terms of how general internal medicine is performing. 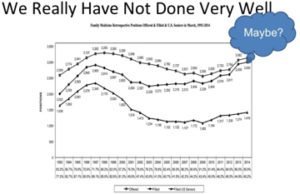 Have we really done very well? This graph shows the total number of residency slots, and the number of slots actually filled. It also shows the number of U.S. senior class medical students.

My answer to the question is maybe. We may be producing the numbers of residency graduates in terms of getting us to the increased production that we project we need.

It translates to about 65 additional positions per year. That is about 12 new family medicine residencies would need to come online every year over the next period of time here in order to ramp up to this level; or an increase in current positions at residency by perhaps two per residency program in the current configuration. But U.S. seniors are not finding this attractive, at least based on the last match. We had a net of six additional U.S. seniors select family medicine.

The Center for Interprofessional Education

Do we need to think about our delivery of the workforce differently? 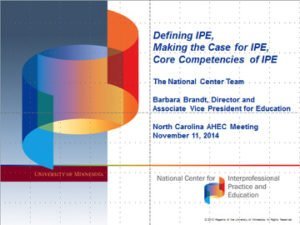 I recommend consideration of Barbara Brandt’s work being done at the Center for Inter-professional Education.

She proposes creating new partnerships that bring together the education community with the practicing physician community. 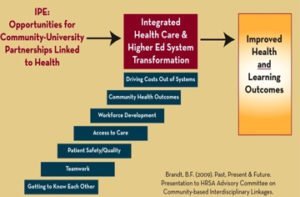 With that question, I’ll conclude.