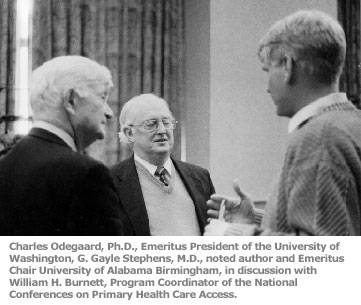 Charles Odegaard, Ph.D., was a Fellow of the Coastal Research Group’s National Conferences on Primary Health Care Access, a former president of the University of Washington, and a member of the Millis Commission that was instrumental in the reform of postgraduate physician education in primary health care.

The following personal history is based on Mr Burnett’s interview of Dr Odegaard took place in Dr Odegaard’s apartments within the University of Washington a year before his death.

CHARLES ODEGAARD’s father was born in Norway, of a family who emigrated to the United States when his father was only three. Charles’ family was quickly Americanized and had no interest in retaining their Norwegian language or Scandinavian culture. Charles’ mother’s background was English. Her grandfather was responsible for moving the Cord family from England.

Charles’ father became interested in innovations in railroad equipment. Eventually his father moved to Chicago and started the Federal Machinery Sales Company. By that time Chicago Heights, a suburb directly South of Chicago, become a major hub for transcontinental railroads and a center for businesses that served the railroads’ construction and engineering needs.

Charles was born in Chicago Heights in 1911. His father had a good friend in Boston who stayed at the Odegaard’s home whenever he came to Chicago. The friend, originally from Sweden, was an expert on machine tools. His father collaborated with that friend on a variety of sales and engineering projects. It was that friend who encouraged Charles to pursue collegiate studies in New England.

Charles’ earliest memories were of Edgewater, Illinois. There he went to Senn High School in North part of Chicago. The high school superintendent proved to be an excellent role model, who encouraged Charles’ interest in Latin studies. Charles was interested in general history and the evolution of the culture of the United States. His success in Latin at Senn High School affected his choice of college — Dartmouth — and his course of study there.

Charles pursued an undergraduate degree at Dartmouth from 1928 to 1932. He described Dartmouth as a good choice of college for him — just big enough to have a diverse student body. His Western European background led to his interest in how European cultures affected the U. S. At Dartmouth, his primary course of study was Latin. (Charles stated that his Greek was less developed.)

He continued his Latin studies at Harvard from 1932 to 1934. The subject of his Ph.D. dissertation was the gradual diffusion of Latin culture across Europe and the early development of the Classical world. His teaching emphasized the continuity between the classical period, the Later Middle Ages and the European cultures of recent times.

His experiences at Michigan formed the basis of much that he did at the University of Washington. In 1958 he became president of the University of Washington. On his arrival there, he came he found that its schools and colleges were separated and independent of one another. From the viewpoint of a student, there were underlying similarities in the schools, but there was no dialogue between their faculties.

Odegaard wanted to change the culture of the University, abolishing the insularity of the individual schools. He set in motion a strategy to engage the faculty of any given school in dialogues with the University’s other schools so as to understand each school’s successes and how those successes might be diffused to the others.

In furtherance of such dialogue, he promoted the European tradition of collaborative governance. By promoting collaborative governance during the 15 years of his presidency, Odegaard profoundly changed the University of Washington. The medical school was at the beginning of the period of major change that engulfed most medical schools from the late 1950s on. However, Odegaard insisted that the entire University would participate in making decisions on how the medical school evolved. Here again the goal of broadening the level of faculty discourse throughout the several disciplines assured that the medical school growth would not occur without the overview and involvement of the wider University.

Odegaard noted that when medicine was developing in the 1950s, there was a tendency to be enchanted by discoveries of the scientific side of medicine, with the result that human behavior tended to be ignored. Odegaard believed, however, that medical schools needed a broader understanding of patterns of human behavior and how those patterns affected the course of events. This led to encouragement of not just the scientific base of medicine but its humanistic values as well.

The WAMI idea [of a regional program designed to serve the health care workforce needs of Washington, Alaska, Montana and Idaho, more recently expanded to include Wyoming] considerably widened the role of the medical school. WAMI began early and evolved slowly. Odegaard had some allies and then, with a lot of salesmanship, converted people to the idea.

There was an understanding that the community-based activities were serving useful purposes. Odegaard opened up dialogue with neighboring colleges and universities. He began discussions with Washington State University. He thought it useful to understand what was going on in Pullman. Next he began discourse with Washington’s three state colleges. Odegaard and his counterpart at Washington State invited the three state college presidents to join them.

The phenomenon of Washington’s five publicly supported universities coming together to discuss common interests had enough impact that the members of the legislature asked to be part of it also. They created an organization on which legislative representatives could sit. This led us to the development of the community college system.

They shared concerns about how care should be given sick people and sought to understand what problems each person was confronting. Then they had to decide the bits and pieces that created a problem in one setting that impacted the larger problem. Odegaard noted that time was so far in the past, that he could not speak with any degree of accuracy about those days.

The membership of the Millis Commission changed from time to time throughout the development the report, but he remembers that the preparation of the report led the Millis Commission members to a discourse that none had ever had before. [Odegaard recalled that he met Abraham Flexner in the Harvard Club in New York. Flexner was interested in fly fishing. Odegaard had tried fly fishing and was not too successful at it. This was the subject of his only conversation with Flexner.]

When asked about what Odegaard regarded as his legacy, he replied that it is better recognized that human behavior determines the happiness or unhappiness of human beings and that in treating sick people, one needs to be as concerned about their human qualities as their animal biology. He recalls moments of enthusiasm and discouragement, but regards us as better off than we were before the Millis Commission’s work. The family-orientation, community-orientation, behavioral emphasis is having a growing impact on medicine, but there are still things to be ahcieved.

When asked about how he felt medicine should evolve, he expressed his satisfaction that family physicians have been trained to “worry about the people” and collectively have broadened the idea that an understanding of social behavior is a key part of medicine. He noted that he has been a long-time proponent of closer collaboration between the fields of family medicine and general internal medicine. Although he is satisfied that there has been progress towards this goal, he believes far more should be done to promote such collaboration.

“The revision of bylaws and codes was, however, only the first step in the process of strengthening the administrative functions. The rapid growth of the postwar decade had been marked by a considerable decentralization in the making of policy. Colleges and administrative divisions pulled somewhat against one another, lacking a superior coordinating authority, and practices adopted at the lower levels received too little scrutiny and review. The task of redressing the balance of the parts within the whole, and of bringing the total operation into focus, was emphasized by President Charles Odegaard as his first responsibility when he took up his duties in August, 1958.

“The accomplishment of such a goal required measures which were new in the management of university affairs, and quite complex. In one division after another, new administrative officers were appointed, either at the top or just below the top, in order to strengthen the process of supervision and review. A significant number of faculty members became assistant deans on a part-time basis, or accepted special administrative assignments directly from the president himself. The conduct of departmental affairs became increasingly involved, requiring the appointment of subordinates to handle details and to assist with the preparation of administrative data. . .

“As a result of this accentuation of the mechanics of administration, the operational problems of the institution inevitably came to be more intrusive. Some professors were challenged by the managerial revolution; others were suspicious of it and wished only to be left along to their teaching and research . .

“Management was freshened, however, by the youthfulness of those in charge, and was made useful by the development of improved direction and controls. The president infused a new cohesiveness and unity into the school and carried out his reorganization with that end in view. At the same time the relations of the University to the state and the community and to other institutions were clarified, as the institution determined and declared what it conceived its proper role to be. . . “In his interpretation of the status and the obligations of the University the president showed likewise his sense of statesmanship. Independent, imaginative and forward-looking as Suzallo had been, Dr. Odegaard preserved even more faithfully the intellectual and the political traditions of the medieval universities which had been so vital and creative a force for the advancement of knowledge in their day. The strength of the modern university as of its forebears, he insisted, derived from the “community of scholars” of which it was composed. . . .

“In a very real sense President Odegaard’s inaugural address could be taken as sounding the keynote for the university’s second century. “Washington”, he declared “strives to be nothing less than a great university, serving greatly the people of the state as a human monument fit to mathch the inspring mountains and distant perspectives nature has lavished upon us here, a leader among institutions, not a follower, a pioneer among pioneers as great universities must by deinition ever strive to be.”