We gratefully acknowledge the sponsorship of the Presbyterian Intercommunity Hospital of Whittier, California for funding the transcription and editing of this section of the Proceedings of the Twenty-Fourth National Conference:

The following transcription is of the opening sessions of the 24th National Conference on Primary Health Care Access, held April 8, 2013 at the Grand Hyatt Kaua’i.

Welcome everybody, I’m moderating today. I’m here to deliver the wedgie, pull the hook, – whatever needs to be done to try and stay on time.

I have one announcement to make. If anyone is interested in doing a hike this afternoon with Doctor Charles North on Kauai’s North Shore, there he is, the hiker extraordinaire.

The hike will go the beautiful Hanakapi’ai Falls, right, on the North Shore, partway through the Kalalua trail, so it should be beautiful. There will be free transportation. Who can pass that up? Anyone interested, please see him.

All right, without further ado I would like to introduce Dr. Kevin Haughton, who is going to review our last session. 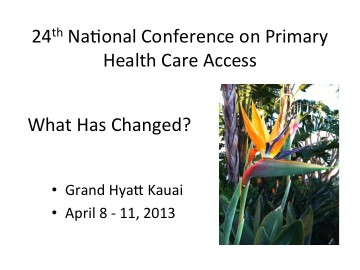 Good morning! Welcome to the 24th National Conference. I recognize many faces from here from last year.

The tradition is that the person who does the closing comments at the end of the national conferences does the opening introduction of the succeeding conference.

The conference theme for this year is “What Has Changed?”

This is where we were last year, at the Park Aviara resort near Carlsbad, California. 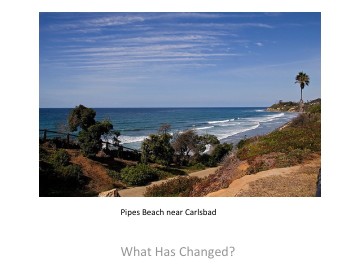 And this is much more what it looks like this year. 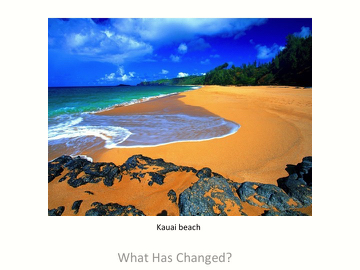 So that’s, this is one thing that’s been a dramatic change. 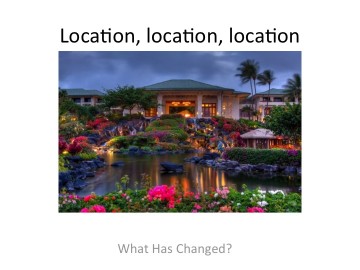 Dr. James Herman gave us a talk last year where he talked about change, and I think it was mostly about a change machine that required dialogue in order to get change back out of it. So that’s been a theme even starting from last year. 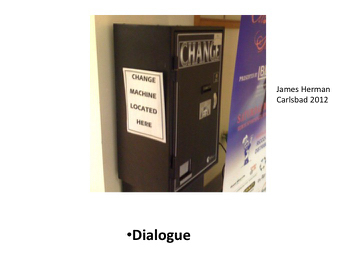 Well, one thing that’s changed is that the general population has had enough. At our breakfast breakout meeting [see Discussion Question, Breakout Groups Announced for 24th National Conference First Day, April 8, 2013], we started talking what I’m hearing in my practice.

Patients come to me complaining about their specific items in their medical bills that sound completely outrageous; $1400 for some routine minor lab work. Tens of thousands of dollars for some hospitalization visit.

These medical bill items have hit the pop literature journalism pretty big time. A Time Magazine article about health care costs referred to a 10,000 percent markup for Tylenol, resulting in an image of a “bitter pill” on the cover of Time Magazine. 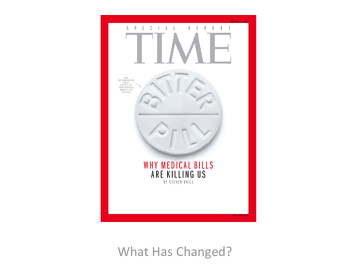 There are a number of things happening on these same lines. Here are three books published by the ABIM Foundation: Over-Diagnosed, Over-Treated and Epidemic of Care. There’s a theme I think that is emerging here. Some patients would have been better off if they had never sought care. There are a lot of things that we’re doing with our current system that’s motivating us to do a lot than we need to. 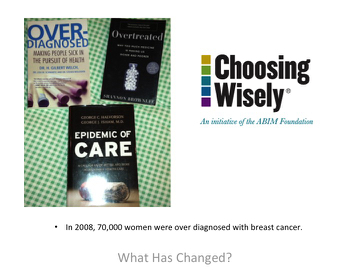 The Centers for Medicare and Medicaid Services (CMS) are involved with this. They are trying to fix primary care. 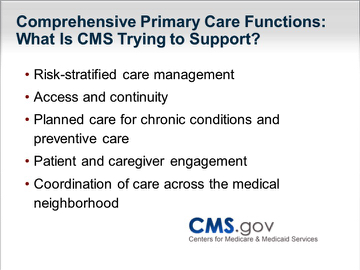 There are a lot of ideas up here that look familiar to you, like patient centered medical home and accountable care organizations. 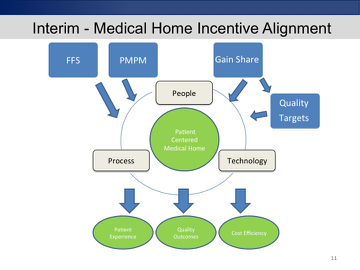 There are some ideas about payment redesign that CMS has been supporting. Some of these are leaking out into the public. 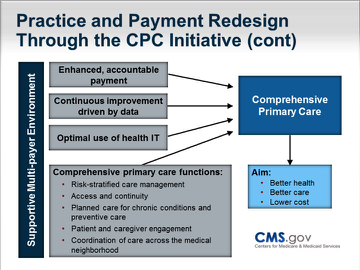 But CMS also included a 2% cut in Medicare reimbursement as of April 1, 2013. I haven’t heard as much crying about that as I would have expected, but I’m anticipating this is expected to continue and I’m not sure anyone’s going to stop it. That will have a big impact on what we’re doing in our system.

I am in a hospital system that wants to become an integrated delivery system on the West Coast. In my particular office we have a deal where with a couple of different payers where we get paid our usual fee for service. In addition, we get a very small per member per month payment in order to build some extra infrastructure to monitor our patients more closely – our chronic disease patients primarily.

Then the actuaries figure out how much money that population of patients was expected to spend on hospitalization and emergency room visits. If we spend less than that amount, then we share that money with the insurance company. Some of what we are paid is dependent on meeting some specified quality targets.

This is very much a baby step. This is the “in-betweener”. There is the accountable care concept, which is as far as we’re hoping to go. Then there is this in the middle. Also there is our usual, old fashioned fee for service preferred provider organization , in which free range patients pay for random acts of healthcare – which is the way we’ve been doing it for the last 50 years.

To give a little history of where we’re going with the ACOs, we should go back to the HMOs of the 1970’s. They were really cranking; I was in Minnesota in the early 1990’s and it was kind of exciting times with managed care.

Then, you know we had a lot of backlash, and slid back to the sort of same old fee for service for a while. So we’re going to have to do it different now. I think th type of capitation we are going to face is much more complicated. Hopefully, it will make us develop a better system as opposed to just withholding care.

We’ve got to keep people out of the hospital, out of the cath lab and out of the operating room. That’s the boat that we want to get on.

In the meantime, we’re making all our money in those places and that’s what’s keeping the health system going.

Somehow, we have to transform the way we pay for this at the same time we’re transforming the way we do it. That’s tricky but we’re up for it! 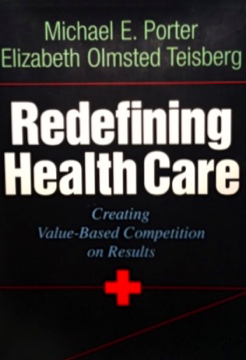 I will cite three geniuses here in a row.

First, Michael E. Porter gets a lot of credit for his 2006 book pushing value-based payment for healthcare. He’s really got us going. He really brought us a long way.

Porter just came out with an article in Health Affairs discussing an idea for redesigning primary care.

His idea is basically to break it up into subpopulations. People who are high-end users, high needs patients like those in the Program of All-inclusive Care for the Elderly (PACE). He’s going to put them on one pathway.

He would create another subpopulation of people who are in their middle age, but who have one chronic disease at the most to make sure they’re getting their mammograms and their colonoscopies.

Putting them in a category of their own with their own systems that manage them as they come through fragments the population. This has been hard for me to take, because I’m an “everybody comes to see me” kind of primary care doctor. That’s what I think of myself.

But Porter is a pretty smart guy. He’s figured out a lot of stuff, so I’m paying attention to what he says and to where he’s going.

That’s another genius we talked about last year, somebody has to do something, it’s just pathetic that it has to be us. 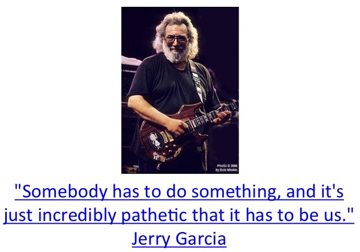 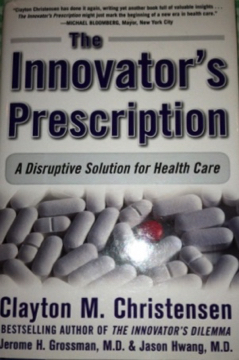 Clay Christianson is another pretty brilliant guy. He is a “disruptive innovation guy” and pretty much gets credit for that term.

His model looks something like this: You have your established businesses, such as IBM in computers, who developed mainframes where there are very high margins. That is their main business.

These new markets have low margins. Cars would be examples of this. So you have your Model T’s and then all of the Detroit stuff, and then they start making Cadillacs and fancy cars. 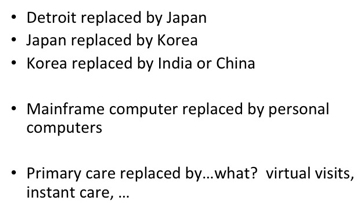 Then in the late 80’s and early 90’s Japan was making these little Datsuns and Hondas that were barely switched over from motorcycles. They disrupted the whole thing, then Japan kind of took off.

Now Japan sort of has been replaced by Korea that came in with inexpensive cars on the lower end of the market. And now there’s $2,000 cars being made in India and China that might do the same thing.

This model of disruptive innovation is pretty widely accepted now. 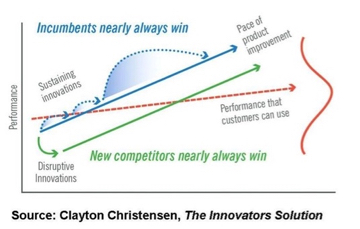 So you know there’s home urgent care visits by this company in Seattle, near where I’m from, offering webcam visits and phone visits, 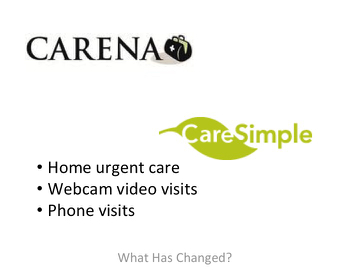 Walgreens has two branches of Take Care clinics. One is like an instant care where you walk in and your seen by a nurse practitioner. Walgreen’s also offers employer-based primary care clinics. 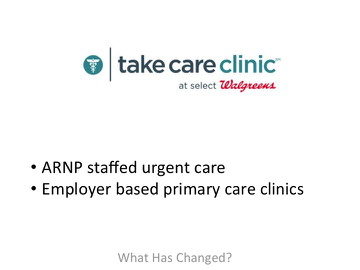 This is, actually an effort by my old group health partners in Minnesota. They have virtual well, where they have 24/7 access to nurse practitioner for 40 diagnoses, similar to the walk-in clinics. There is lots of patient satisfaction for this really easy access, so innovation is out there. 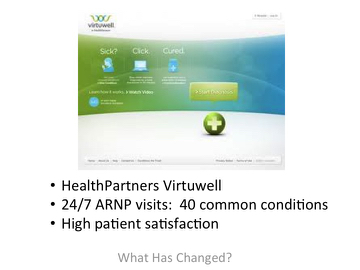 There is lots of other nontraditional stuff that you can think about; lots of new ideas, direct primary care and concierge practices. We’re experimenting with telemedicine.

This is Second Life. It’s an avatar.  It’s where you can make an avatar of yourself, and then go visit some made up doctor and meet him on a fake world on the internet. It’s pretty clever, but apparently people can talk about things through their avatar online that they can’t talk about with a physician in person. 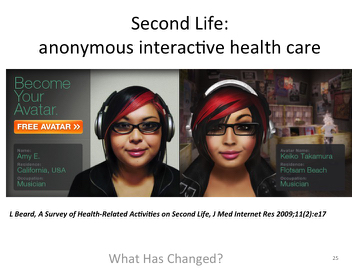 Last year, we talked about PPACA. At that meeting we were expecting a decision from the Supreme Court and Dr. Wilke predicted that the vote would be five to four. 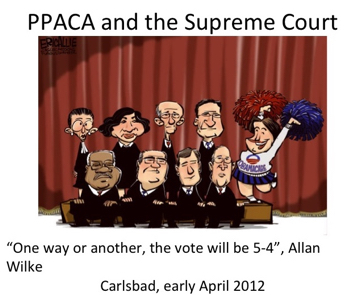 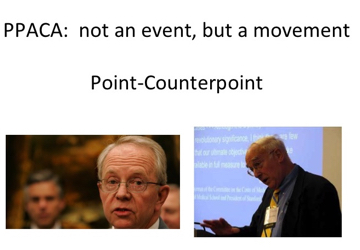 So let’s get started on today’s adventure. Welcome! Let the Games Begin!

Dr Haughton’s Introductory Remarks are followed by: “What Has Changed?”: Health Reform in the U. S. A. – David N. Sundwall, MD